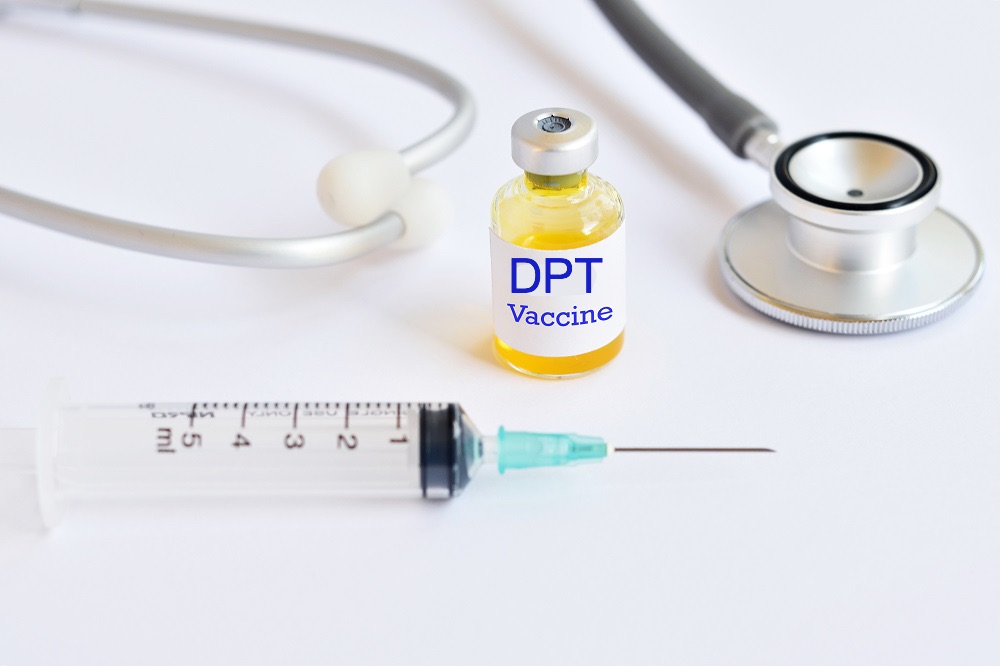 Popularly known as triple antigen, DTwP is composed of tetanus and diphtheria toxoids as well as killed whole-cell pertussis (wP) bacilli adsorbed on insoluble aluminum salts which act as adjuvants. The content of diphtheria toxoid varies from 20 Lf to 30 Lf and that of tetanus toxoid (TT) varies from 5 Lf to 25 Lf per dose. The vaccines need to be stored at 2–8°C. These vaccines should never be frozen, and if frozen accidentally, should be discarded. The dose is 0.5 mL intramuscularly and the preferred site is the anterolateral aspect of the thigh. The immunogenicity (protective titer for diphtheria >0.1 IU/mL and for tetanus >0.01 IU/mL) and effectiveness against diphtheria or tetanus of three doses of the vaccine exceeds 95%.

Most adverse effects are due to the pertussis component. Minor adverse effects like pain, swelling, and redness at the local site, fever, fussiness, anorexia, and vomiting are reported in almost half the vaccinees after any of the three primary doses.

The standard schedule is three primary doses at 6, 10, and 14 weeks and two boosters at 15–18 months and 4–5 years. The standard dose of pertussis vaccine is 0.5 mL; this is administered intramuscularly in the anterolateral thigh of children aged <12 months and in the deltoid muscle in older age groups.The booster should be given ≥6 months after the last primary dose.

Early completion of primary immunization is desirable as there is no maternal antibody for protection against pertussis. The schedule for catch-up vaccination is three doses at 0, 1, and 6 months. The second childhood booster is not required, if the last dose has been given beyond the age of 4 years. Both DTwP/ DTaP are not recommended in children aged 7 years and older due to increased risk of side-effects. It is essential to immunize even those recovering from DTP as natural disease does not offer complete protection.

Efficacy and Preference of a Particular Acellular Pertussis Vaccine Product

It is similar to that afforded by the whole-cell vaccines.DTaP vaccines are not more efficacious than DTwP vaccines, but have fewer adverse effects.

A wholly acellular pertussis vaccine series was significantly less effective and durable than one that contains at least one dose of the traditional whole cell vaccine.Crux – include at least one whole cell vaccine in the schedule.The current evidence is tilted in favor of wP vaccines as far as effectiveness of the pertussis vaccines is concerned. However, the industrialized world would not take the risk of reverting to wP vaccines considering the low acceptance of these vaccines by the public in the past.

Vaccination of Adolescents and Adults

Immunity against pertussis following primary or booster DTwP/ DTaP vaccination wanes over the next 6–12 years. So, it doesn’t matter which pertussis you chose, booster is recommended at 9 yr .Most nations do routine booster immunization of adolescents and adults with standard quantity tetanus toxoid, and reduced quantity diphtheria and acellular pertussis (Tdap) vaccine instead of tetanus and diphtheria (Td). The standard strength DTwP and DTaP vaccines cannot be used for vaccination of children 7 years and above due to increased reactogenicity.Immunogenicity studies have shown that antibody response to a single dose of Tdap booster in previously vaccinated children/adolescents is similar to that following three doses of full strength DTwP or DTaP vaccines.The Indian Academy of Pediatrics (IAP) has also recommended only a single one-time dose of Tdap to adolescents aged 10–12 years of age.There is no data on the effectiveness of aP vaccines in India.

Catch-up vaccination is recommended till the age of 18 years.

Persons aged 7 years through 10 years who are not fully immunized with the childhood DTwP/DTaP vaccine series, should receive Tdap vaccine as the first dose in the catch-up series; if additional

doses are needed, Td vaccine should be used. For these children, an adolescent Tdap vaccine is not required.

A single dose of Tdap may also be used as replacement for Td/ TT booster in adults of any age, if they have not received Tdap in the past.

Tetanus toxoid, and reduced quantity diphtheria and acellular pertussis can now be given regardless of time elapsed since the last vaccine containing TT or diphtheria toxoid.

There is no data at present to support repeat doses of Tdap.

Indian Academy of Pediatrics recommends decennial Td booster for those who have received one dose of Tdap (5 years for wound management).

Only aP-containing vaccines should be used for vaccination in those aged >7 years.

It is desirable to regularly boost adult immunity against diphtheria in addition to tetanus every 10 years.

Safety of Tdap during pregnancy:

There is limited safety data available .A recent study demonstrated that infants whose mothers had received Tdap vaccine during pregnancy had higher pertussis antibody concentrations between birth and the first vaccine dose than the cohort whose mothers did not receive the vaccine.

Tetanus toxoid, and reduced quantity diphtheria and acellular pertussis during pregnancy: Maternal immunization, particularly of pregnant women may be an effective approach to protect very young infants and neonates. IAP therefore now suggests immunization of pregnant women with a single dose of Tdap during the third trimester (preferred during 27 weeks through 36 weeks of gestation) regardless of number of years from prior Td or Tdap vaccination. Tdap has to be repeated in every pregnancy irrespective of the status of previous immunization (with Tdap). Even if an adolescent girl who had received Tdap 1 year prior to becoming pregnant will have to take it since there is rapid waning of immunity following pertussis immunization.

WHO guidelines for administration of Tdap/Td in pregnant women

Fully immunized: Five childhood doses (three primary doses plus two boosters) and one adolescent booster Tdap: one dose of Tdap is necessary in every pregnancy.

Primary immunization: The primary infant series should ideally be completed with three doses of wP vaccines. Goal is to achieve early and timely vaccination initiated at 6 weeks and no later than 8 weeks of age, and achieve high coverage (≥90%) with at least three doses of assured quality pertussis vaccine at all levels (national and subnational).

Boosters: The first and second booster doses of pertussis vaccines should also be of wP vaccine. However, considering a higher reactogenicity, aP vaccine/combination (Table 1) can be considered for the boosters, if resources permit.

They should be immunized against pertussis.

For children who are completely unimmunized, catch-up vaccination should be provided by giving three doses of tetanus toxoid-containing vaccine (DTwP/DTaP/Tdap/Td) at 0, 1, and 6 months depending on the age of the child and nature of previous doses received for more comprehensive protection. For partially immunized children, catch-up vaccination entails administration of at least three doses of tetanus toxoid-containing vaccine including previous doses received. Children with unknown or undocumented history should be treated as unimmunized.

This vaccine comprises diphtheria and tetanus toxoid in similar amounts as in DTwP/DTaP, should be stored at 2–8°C and the dose is 0.5 mL intramuscularly. It is recommended in children below 7 years of age where pertussis vaccination is contraindicated.